Seventeen Indigenous players have donned the black and white. Wally Lovett was the first, Leon Davis was the first to play 200 games for the Magpies and Sharrod Wellingham was the club’s first Indigenous Premiership player.

Fresh to the Pies in 2021, Aliesha Newman brings great experience to the side. Having spent four seasons with Melbourne, she has established herself as one of the league’s best small forwards.

‘Newy’ is known for her blazing efforts on the run and is electric in front of goal. In 2017 she took out the league’s Goal of the Year Award.

Newman is a strong leader and is a great role model. 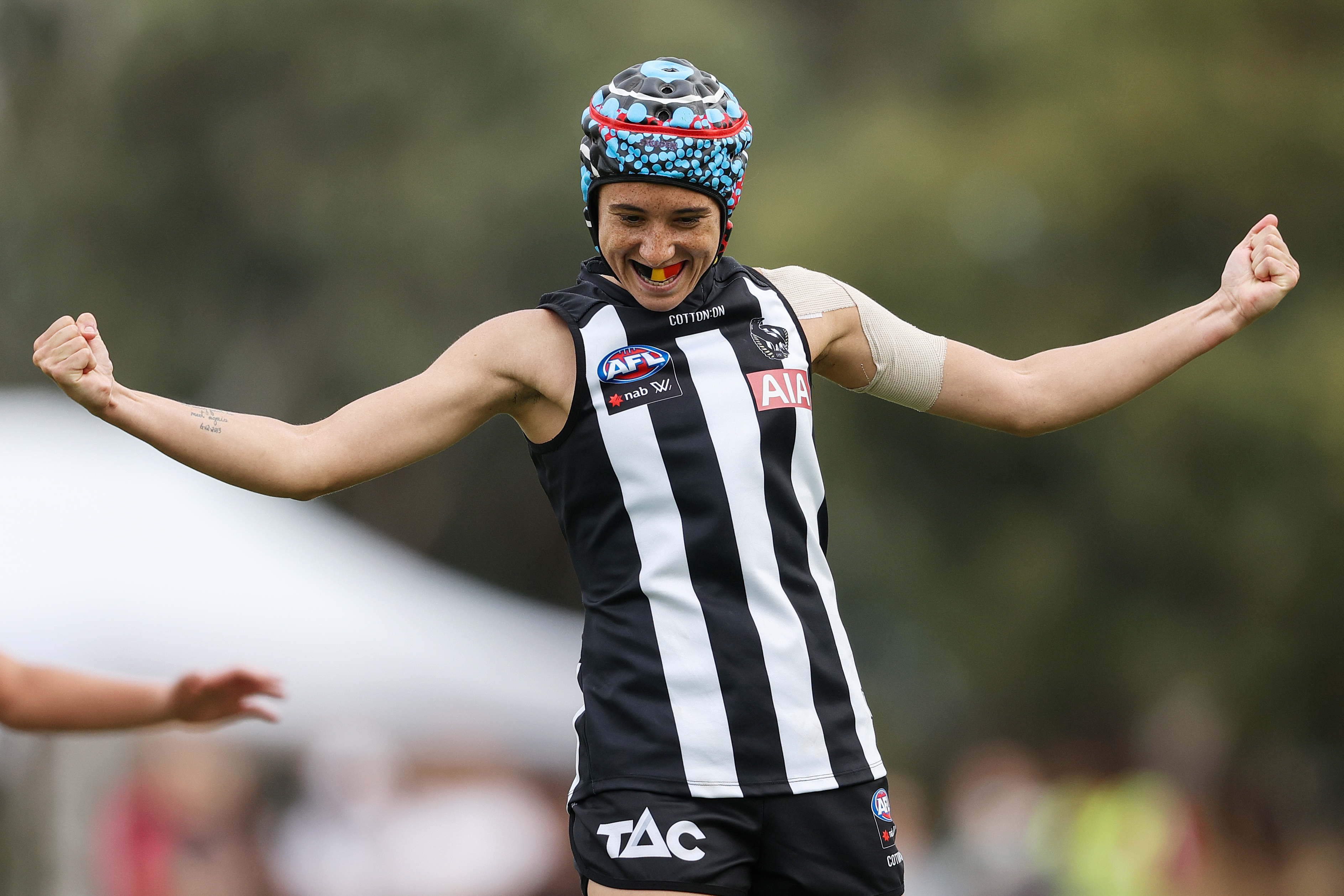 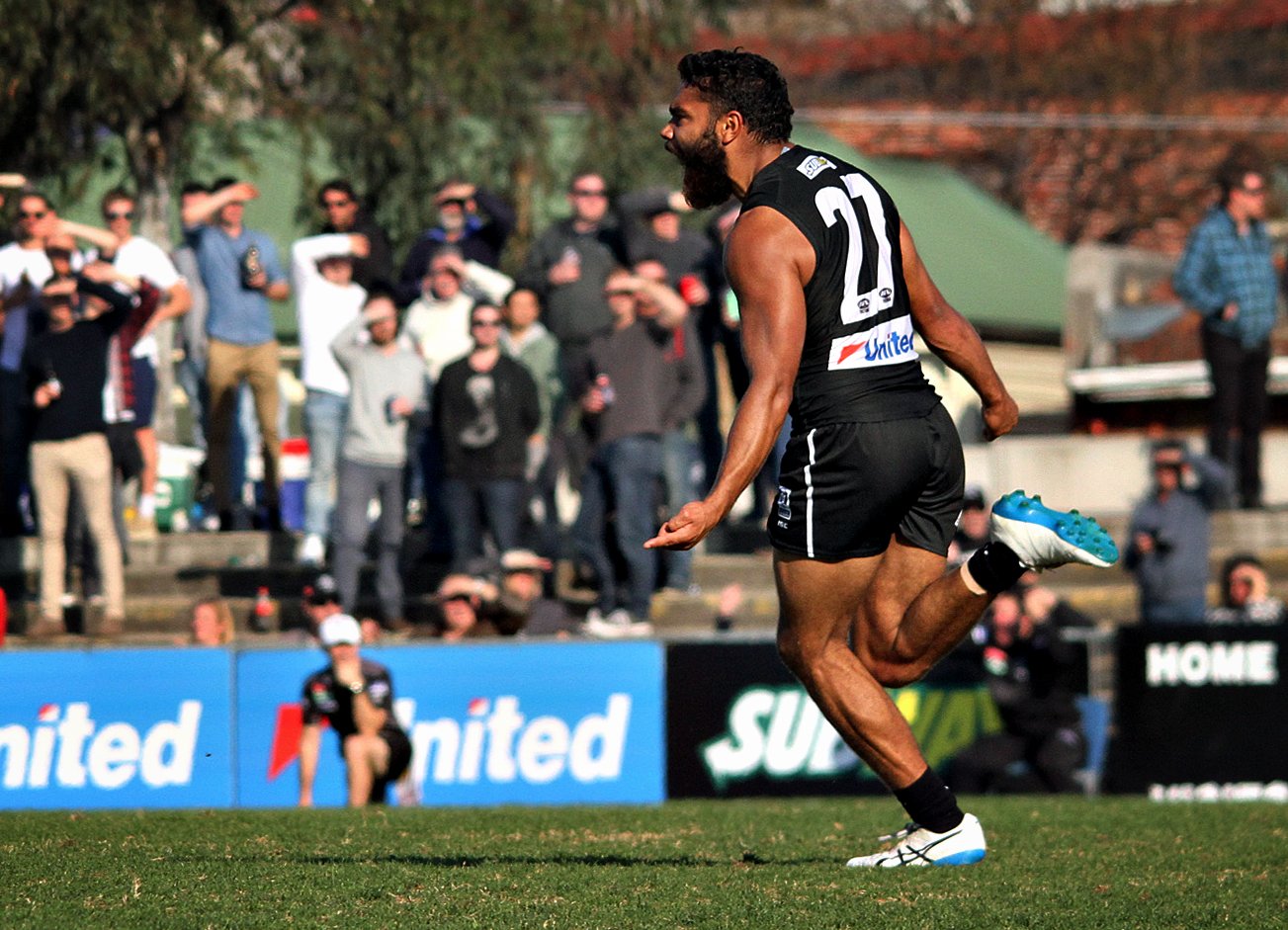 Hailing from Swan Hill, he played with the Tyntynder Football Club seniors side at the age of 16. He played for the Bendigo Pioneers in the TAC Cup for the 2015 and 2016 seasons, in which he kicked 32 goals in 2016. In 2016, he played the final two games for Richmond in the VFL where he kicked nine goals, including five on debut.

He was drafted by Collingwood with pick 50 in the 2016 AFL draftand made his debut against Melbourne at the MCG in the final round of the 2017 season. Kirby's 43 goals in the club's reserves matches saw him place third in the league's goalkicking tally for the 2017 VFL season.

On 31 March 2018, Kirby collapsed during a VFL practice match at the Holden Centre. He was taken to hospital and it was discovered that he has an underlying heart condition. At the conclusion of the 2018 season, Kirby retired from professional AFL football.

Wells was selected by North Melbourne with the number two overall pick in the 2002 AFL draft and made his debut in 2003 playing 18 games and averaging 12 disposals per game.

At the conclusion of the 2016 season, Wells announced his intentions to leave North Melbourne as a free agent and he signed with Collingwood as an unrestricted free agent in October.

On 24 May 2017, it was announced that he would wear number 67 on his guernsey, rather than his usual 3, for the round 10 Sir Doug Nicholls Indigenous Round game against Brisbane. This was to commemorate the 1967 referendum (which allowed Indigenous Australians to be counted with the general population in the census). 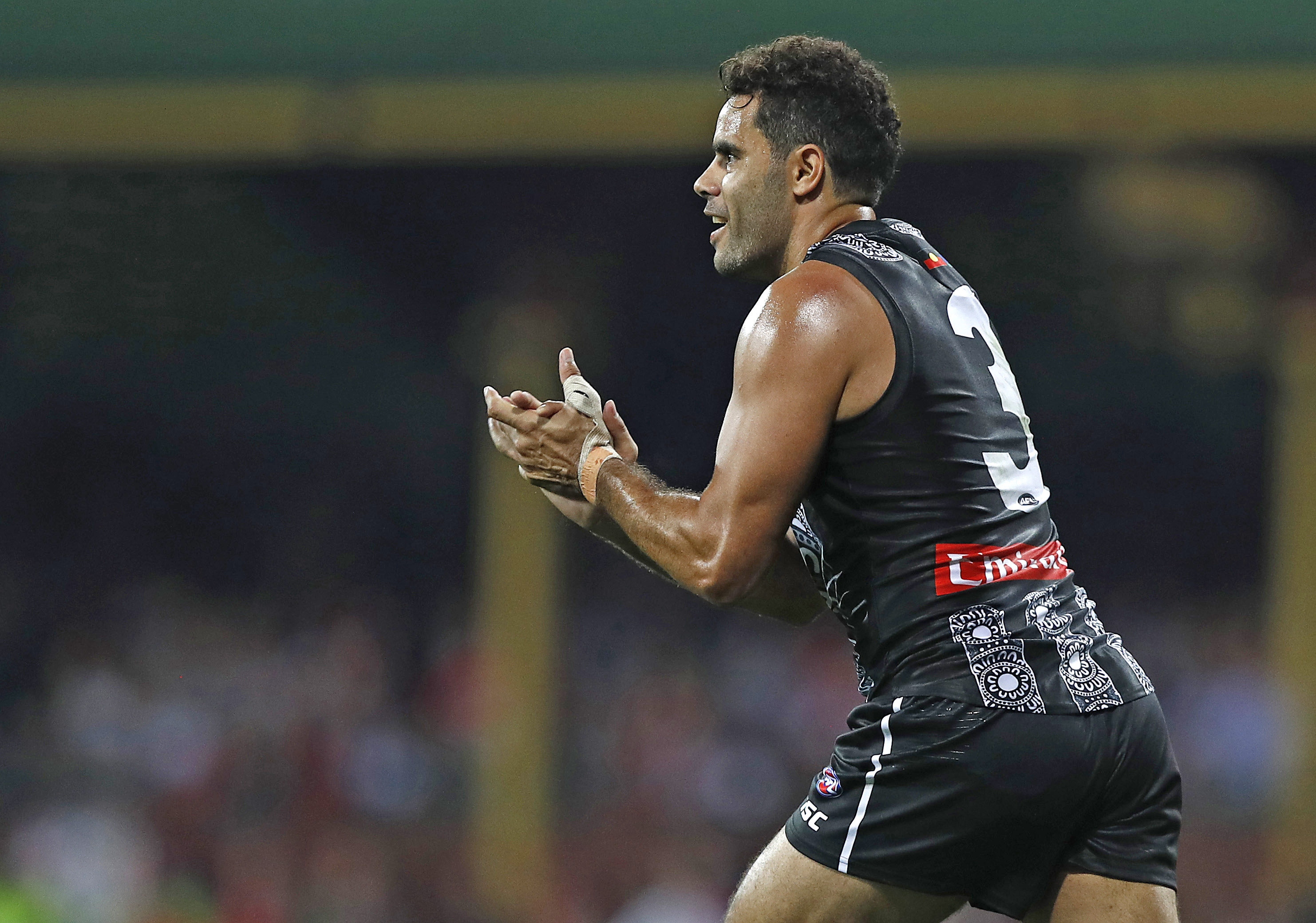 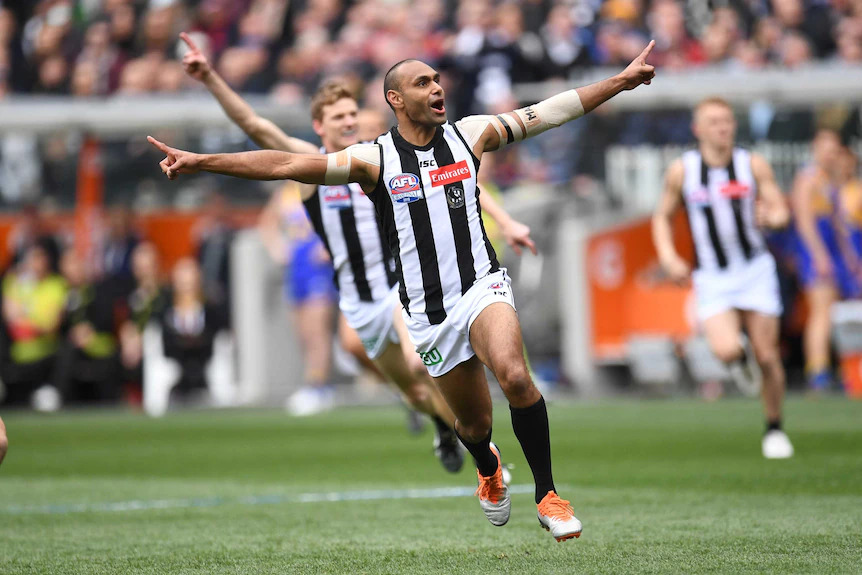 Already a premiership hero at Geelong, Varcoe didn’t take long to become a familiar face in Black and White colours in 2015.

A rebounding defender who added some run and carry to a side that had lost some of its prime runners in Heath Shaw, Ben Johnson and Heritier Lumumba.

Armstrong enjoyed a lively first twelve months at the Holden Centre, spending the majority of the year in the VFL before breaking into the senior side late in the piece, featuring in the final five games of 2014. 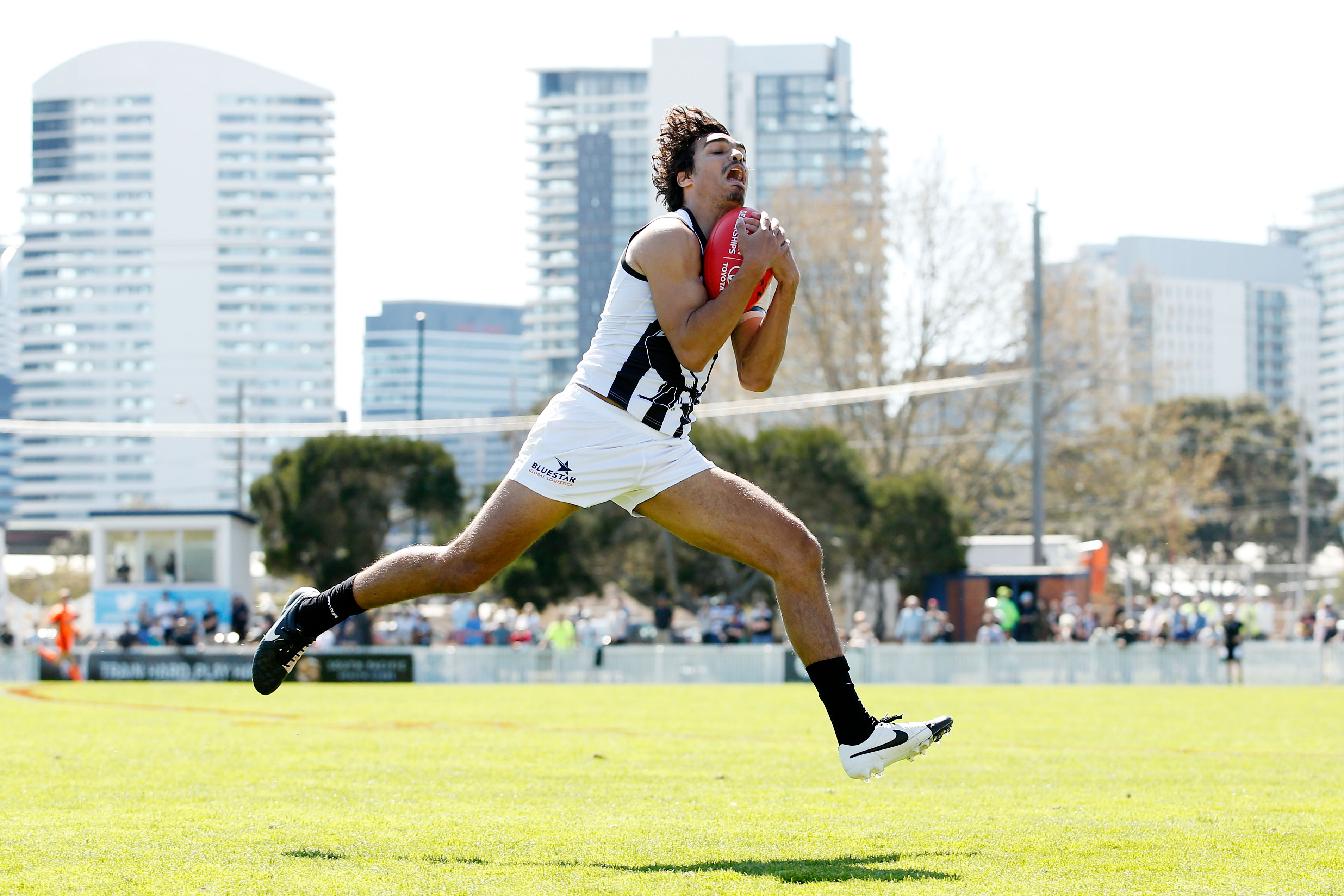 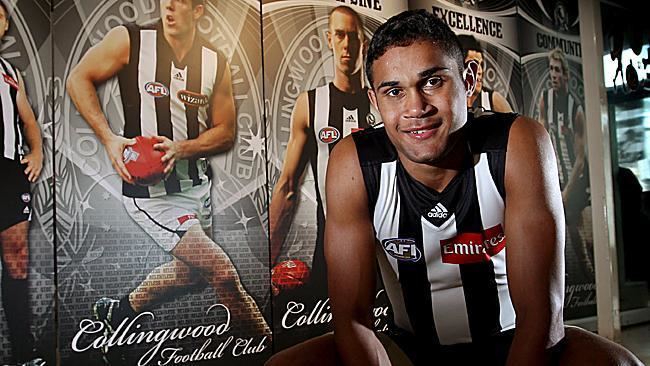 From Morningside (Qld). Failed to get a possession on debut, but had a few touches in his second match.

One of the most creative small forwards of the early 2000s, Krakouer could well have been the story of 2011 had the Magpies been able to secure their 16th premiership against Geelong.

The nifty small forward’s rise from a prison sentence to reborn AFL star was eye-catching, with his twinkle-toed style of play instantly installing him as a fan favourite.

Krakouer was delisted at the end of the 2013 season, aged 30, but left with his head held high, thrilling the fans with 50 goals in 35 games. 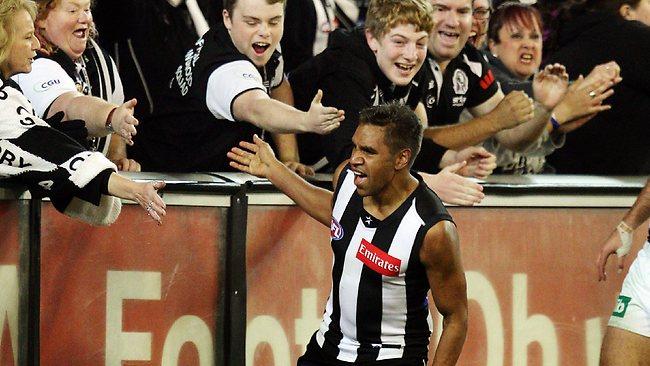 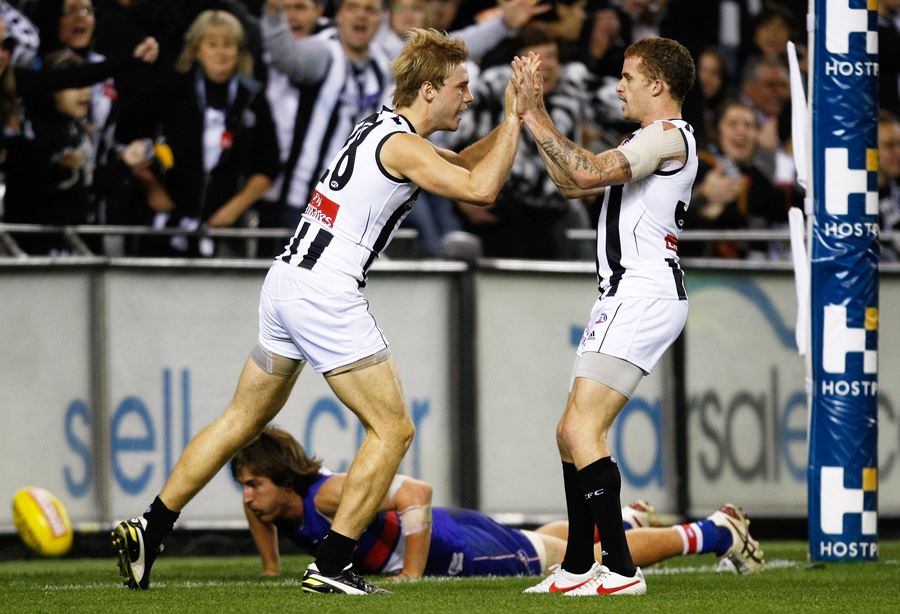 Ex-Nightcliff (NT). He was given his first senior chance in 2004 and showed a willingness to run hard out of defence and work hard. He played mostly as a half-back flanker in his debut season, but established himself as a small forward in 2005 with his pace and goal sense.

In mid-2006 he seriously damaged his knee when he went down in a heavy tackle against Fremantle and required a reconstruction and wiped out all bar the last two games of 2007. The following year he successfully came back and had some good games among his 20, but was surprisingly traded to Collingwood at season’s end. He played three games in his first year and in 2010 missed more than half the season with a knee injury. 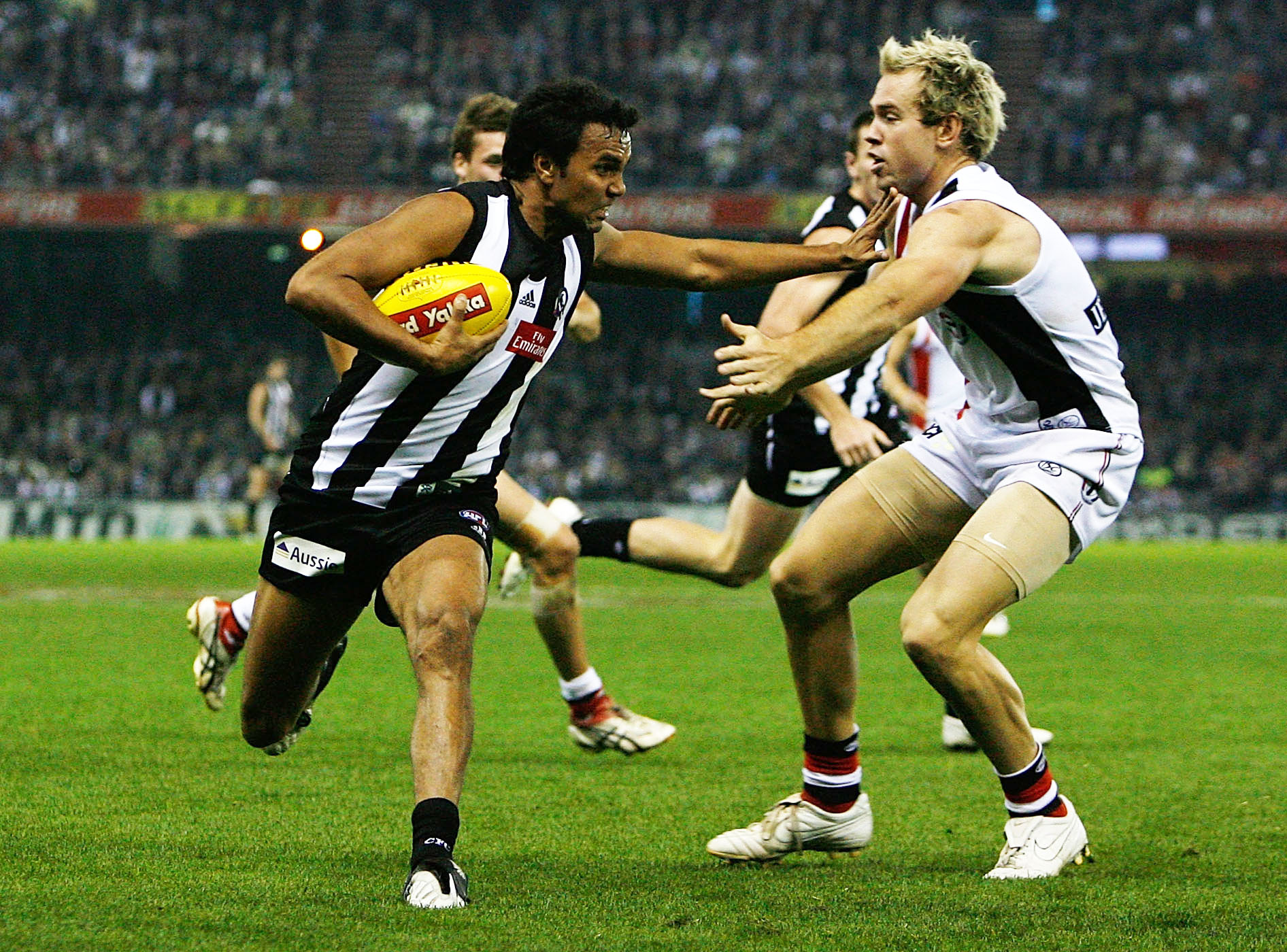 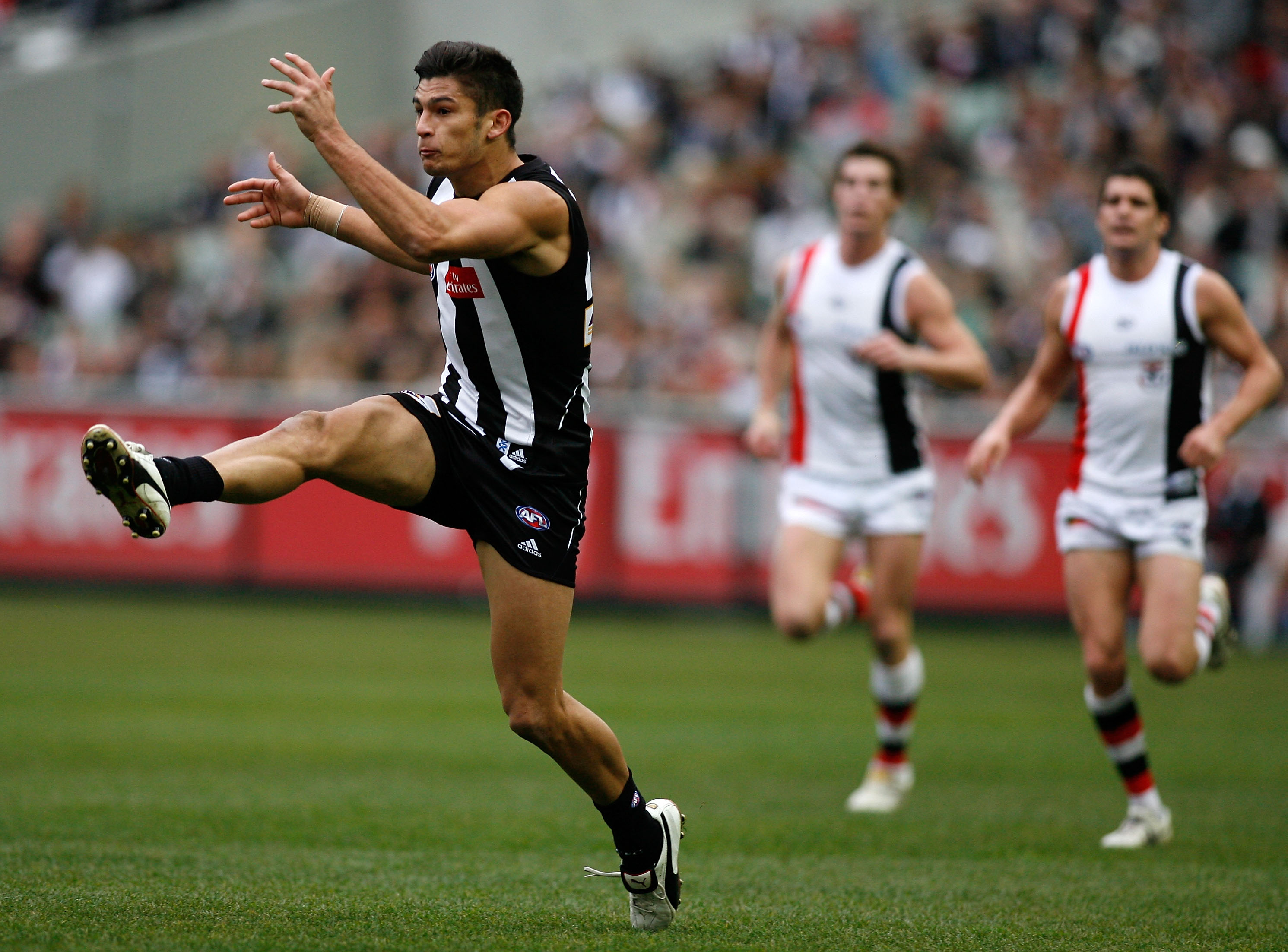 A slippery wingman who enjoyed great success when starting in the centre square due to his ability to clear from the stoppages, Wellingham was one of the faces of the 2010 premiership triumph over St Kilda.

Aged just 22, Wellingham won 20 disposals and kicked two goals in Collingwood’s 56-point win over the Saints which, coupled with his affable personality, meant he quickly won the Magpie Army’s heart.

Ex-South Fremantle (WA) who came to senior football via the rookie list. A defender at first, he showed positive signs as a winger and lead-up half forward.

He played the first half of 2009 at senior level. 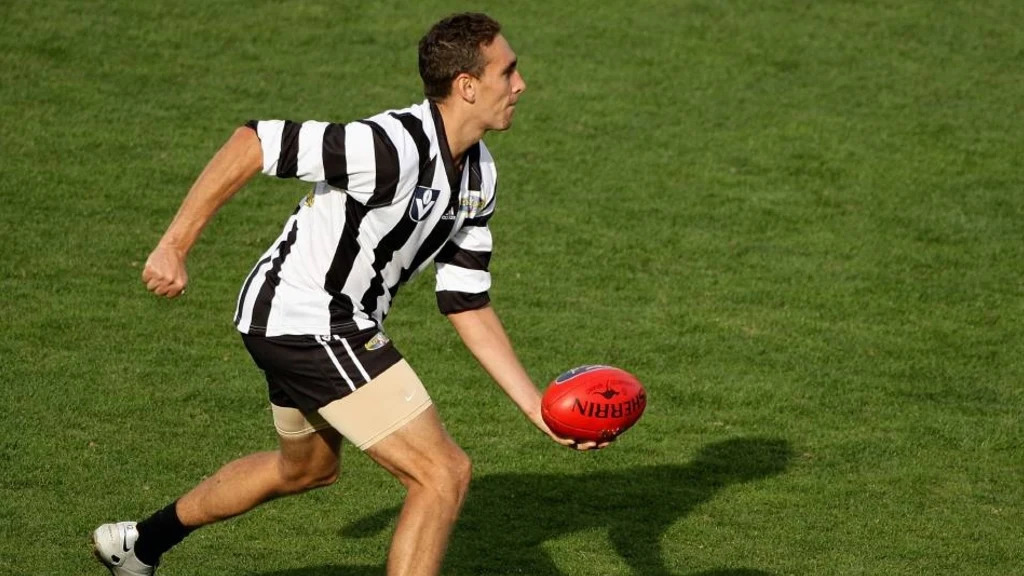 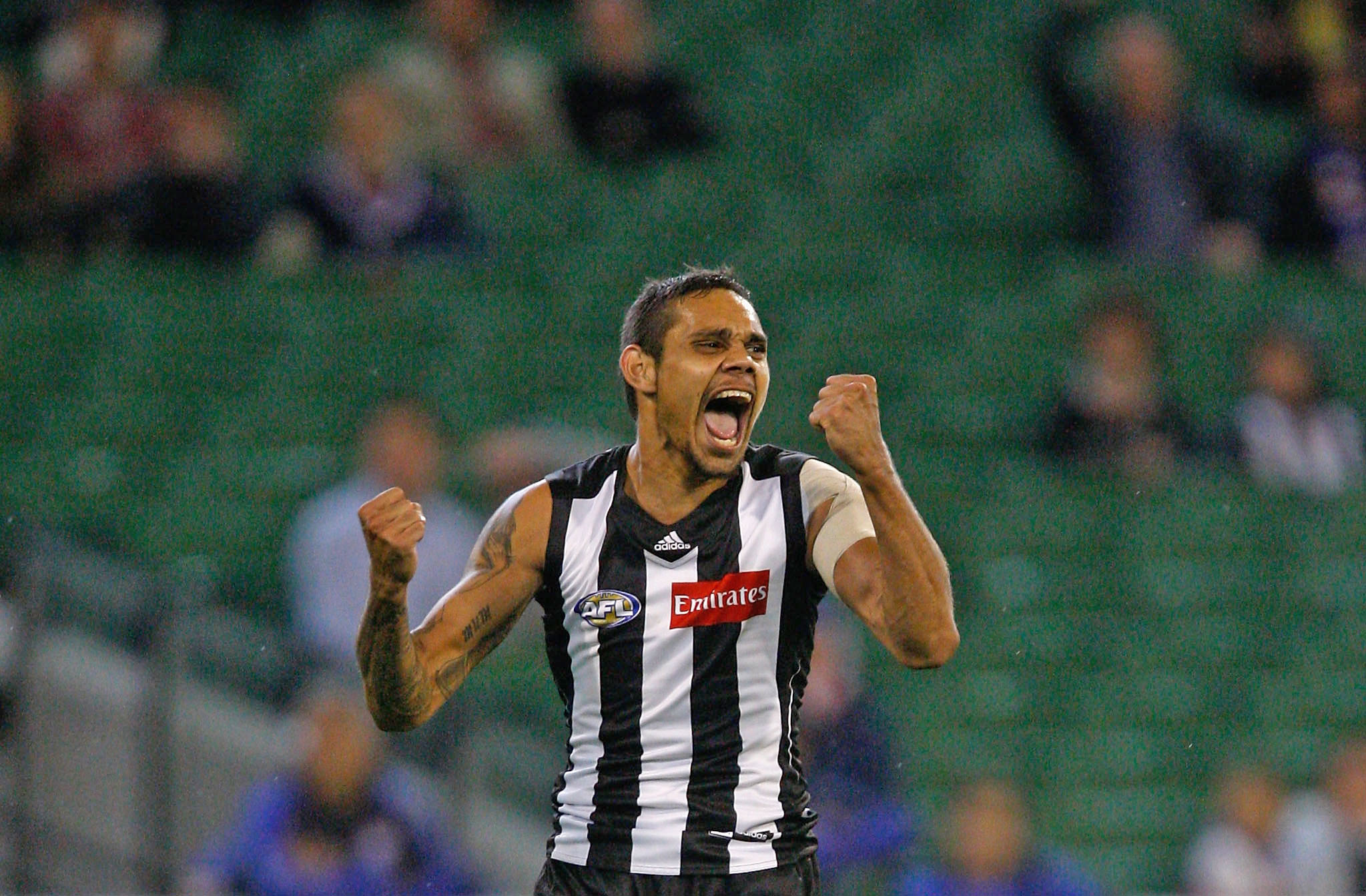 Each time the lightly-framed small forward and part-time midfielder showed great promise in a handful of his matches, including on a few big-occasion moments, injuries seemed to follow.

The speedy and skilled runner’s signature performance came when he kicked five goals on the Queen’s Birthday stage against Melbourne in 2009. It was a performance that had Magpie fans salivating at the prospect of what might be to come.

Ex-Rumbalara and Murray Under-18s. In 2006 he played the first game and didn’t get back until mid-season. He worked hard in the closing weeks and looked more comfortable at the top level.

Because of injuries and a club suspension he played only one game in 2007 and then spent all but two games in 2008 in the VFL. 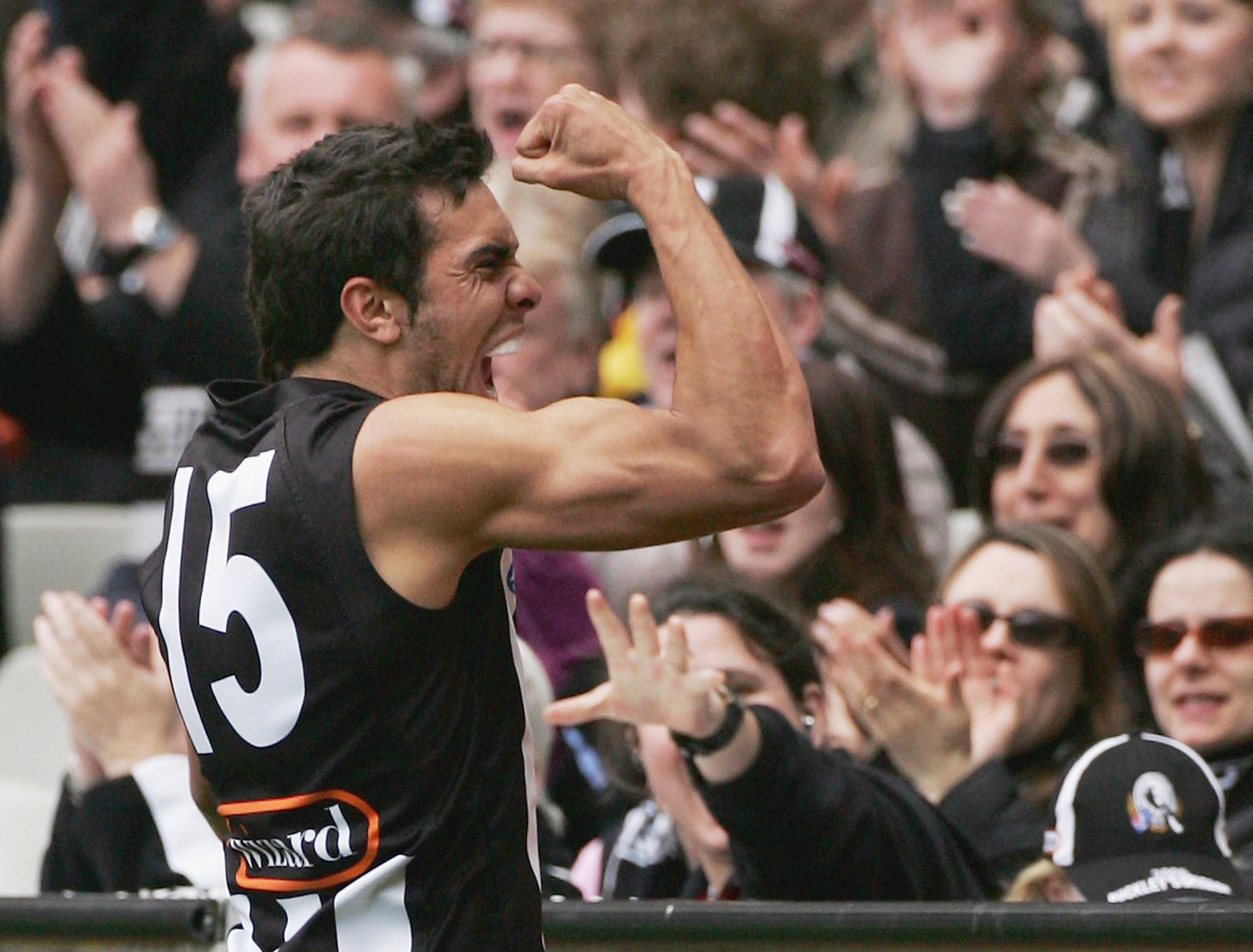 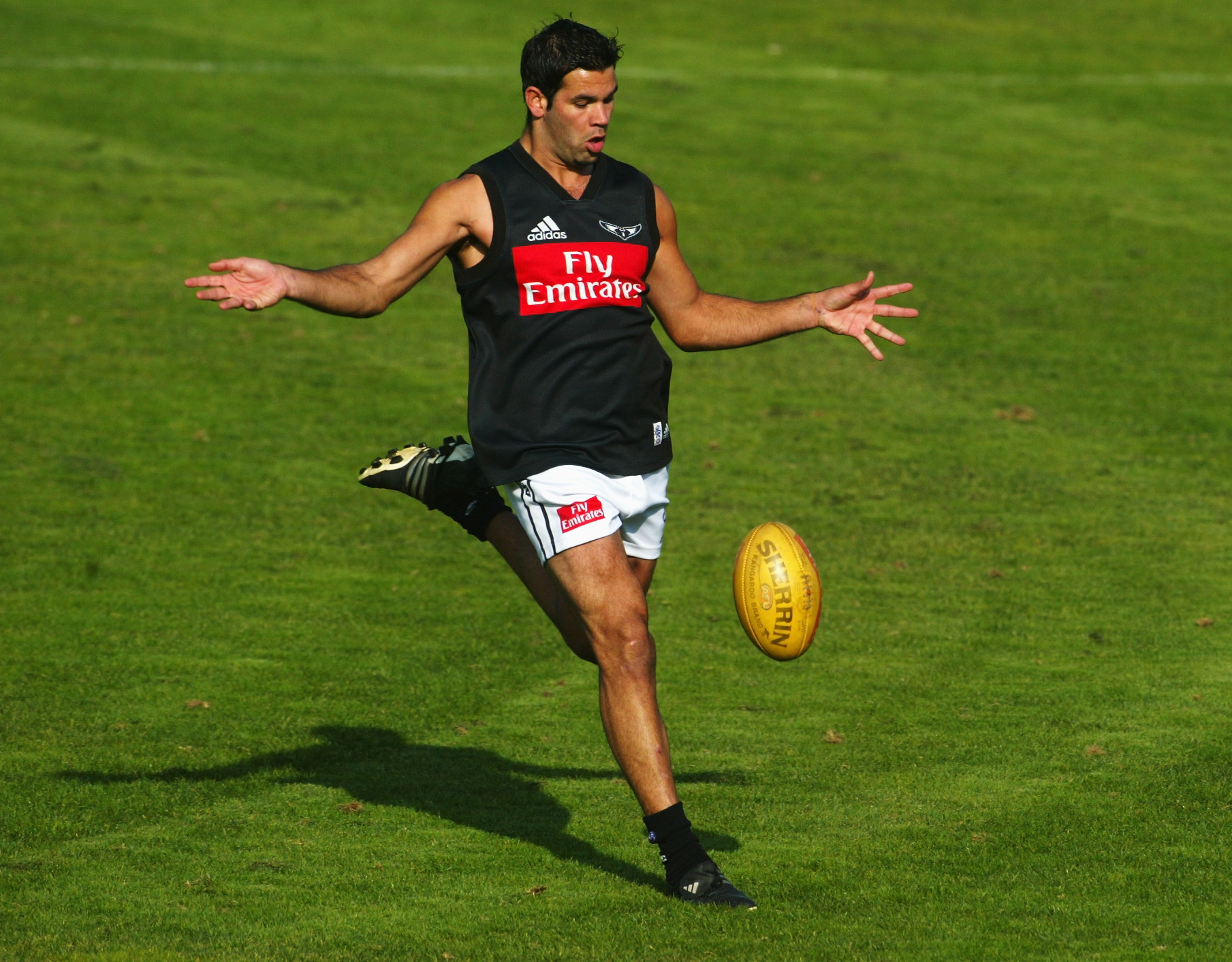 A highly polished footballer who moved to Melbourne as a youngster and was looked after by his guardian, Beverley Knight, an Essendon board member. He was drafted by Collingwood and became a regular in defence in the second half of 2003. He had a disappointing Grand Final, but in 2004 his efforts in defence were a highlight of an otherwise low-key year for the Magpies.

His confidence built every week and he came seventh in the best and fairest.

Although he didn’t enjoy the nickname “Neon Leon”, Davis was an instant hit with Collingwood fans in his debut season.

Originally from Perth, Davis was likened to Melbourne star Jeff Farmer, with twinkling feet producing excellent evasive skills and during 1999 he progressed from the Perth Under-18s to the senior side where he played mostly on the wing. 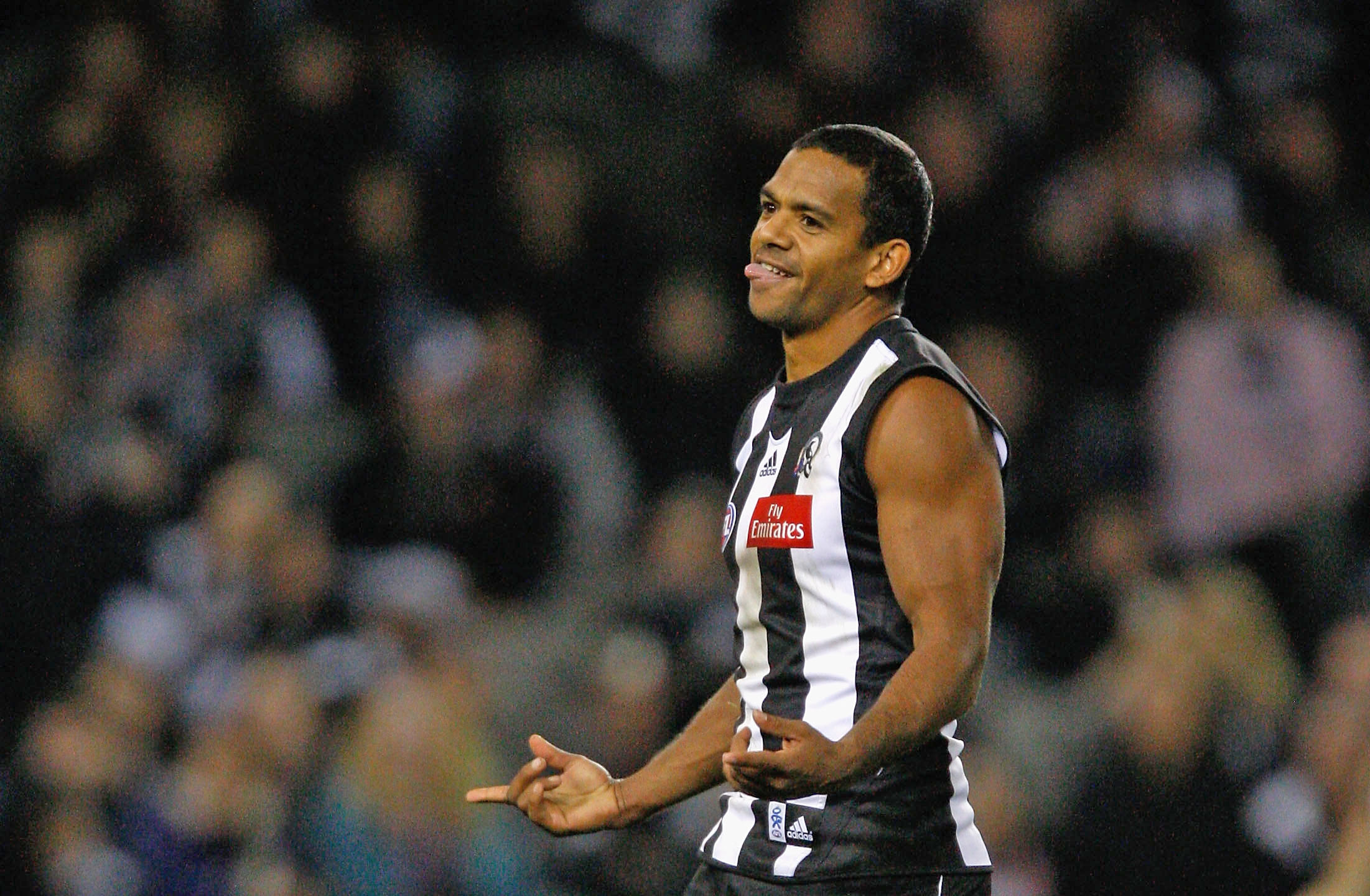 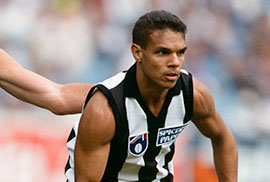 An exciting Aboriginal player recruited from Darwin who played 14 games for the Magpies in 1997.

Collingwood’s first ever Indigenous player came to the club in 1982 almost by accident.

The Pies had been chasing another player from Heywood, near Portland, and when inviting him to training, asked him if any of his teammates were also worth a look. That player nominated Wally Lovett as a youngster they should talk to.

Lovett was invited to Victoria Park for the 1982 season and made such an impression during that first pre-season – most of which he spent commuting from Heywood for training sessions – that he walked into Collingwood’s team in Round 2 and kept his spot for most of the rest of the year. 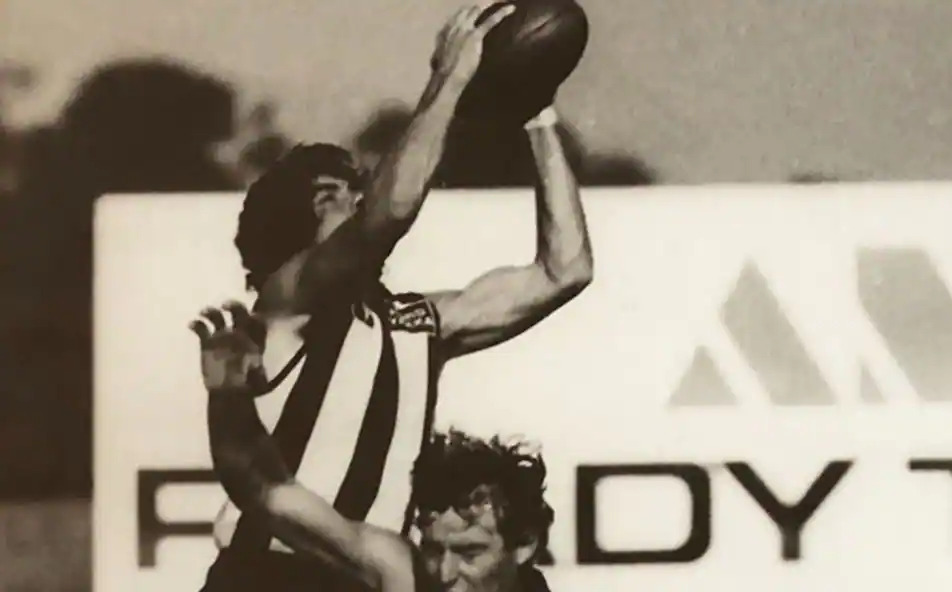